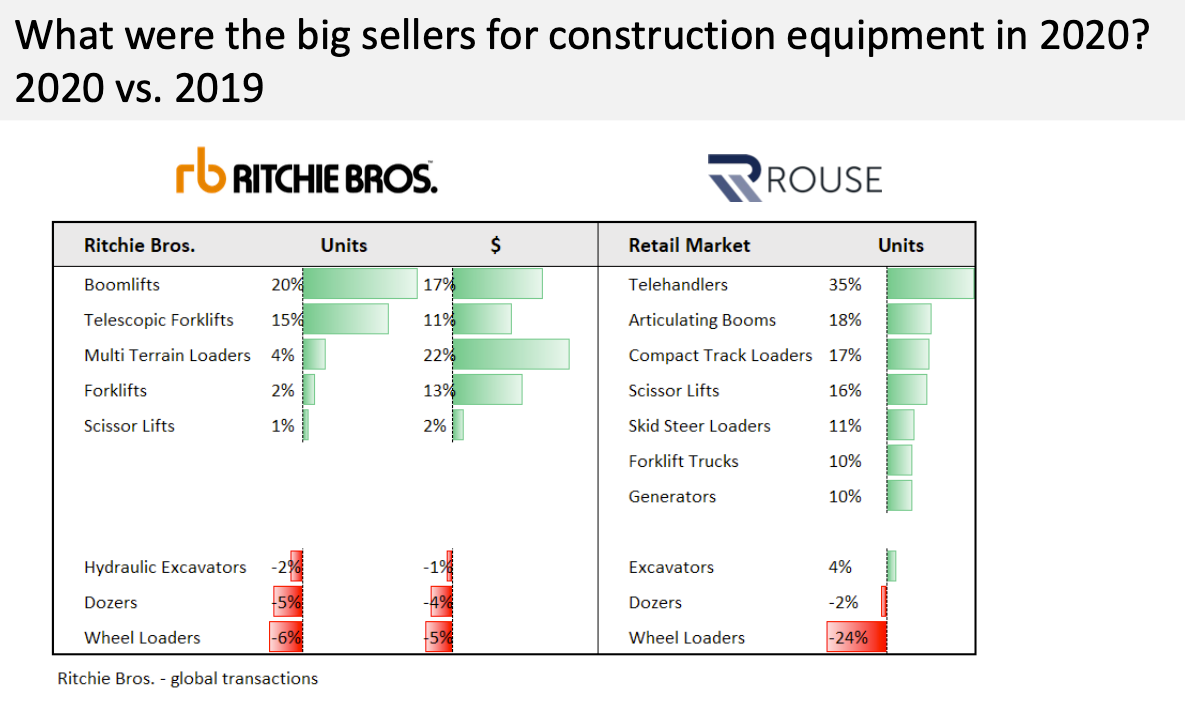 Supply chain constrictions, industry demand for certain types of equipment and a construction market that’s proven resilient are all leading to a current strong demand for used equipment, according to an industry panel.

Supply side issues are contributing to the picture, Vazquez said, with customers waiting three to four months for both large and compact excavators from certain brands. “We’re seeing an enormous problem when it comes to the new side, and I think it’s only going to get worse,” he continued.

And on the used side, “everyone’s looking for late model equipment, but it’s difficult to source right now,” Vazquez said.

And overall, said Vazquez, “Associated Equipment Distributor members are seeing a tremendous amount of growth on the smaller side of equipment.” (Vazquez was also speaking as an AED board member.)

In 2020, telehandlers were strong in terms of number of units sold on both the auction side (Ritchie Bros.) and retail side (Rouse). Not so strong: wheel loaders and dozers.Ritchie Bros.

Overall, “there was an uptick in some of the assets we sold, especially with telescopic forklifts, compact track loaders and scissors,” Olive said. “There was solid demand throughout the year for all of those assets.”

“Aerial lifts and telehandlers are rental-first equipment and a lot of rental companies have been cycling over their fleet after those fleets grew substantially” in the past few years, said Doug Rusch, managing director, Rouse Services, a Ritchie division.

“Demand is matching up nicely with sell off, and when you have that dynamic you have a lot of stability in retail values,” Rusch said. Retail prices in 2020 were just 3 percent lower than in 2019, according to Rouse’s retail value index, which tracks fair market value prices.

“We really did not see a Covid-19 trough in the retail marketplace,” Rusch said. “This is quite a remarkable statement given all the headwinds.”

The retail value index is important to dealers, said Vazquez, because it’s something banks closely watch. If prices plummet, banks are less likely to lend. “About 70% of our deals are still retail deals,” he said, “and the residual value of our products is essential to maintain a strong number at the end.”

According to Rouse figures through January of this year, the average age of retail equipment sold was 64.4 months. This number has been trending upwards since January 2019, when the average age was 50.1 months.

On the auction side, the Rouse Forced Liquidation Value index is showing that pricing “is seeing a remarkable recovery, with 5% higher auction prices than last January,” Rusch said, and 11% higher than in spring Covid trough. “The pricing is quite strong.”

The shifts were more dramatic on the lift and material equipment side. Prices for these machines in the company’s Mix Adjusted Use Price Index went from minus 7% in March 2020 compared with the same time period in 2019 to an increase of 9% in February, when comparing it to February 2020.

There has also been a depth of market along with the strong demand, according to Olive.

“If we can find the assets, there’s depth to the asset sectors,” he said. “Where we didn’t see depth year ago, there certainly is now.”

“There is so much strong demand in the marketplace.” Olive added. “All you have to do is look at indicators such as our watch lists, PriorityBidding and site visits.”

Ritchie, which has been running online-only auctions since the pandemic broke, has seen its PrioirtyBid option open up in the virtual environment, said Kevin Kobus, Ritchie’s vice president, U.S. live auctions and operations.

With PriorityBid, bidders can set a maximum proxy bid on a piece of equipment, one that will increase incrementally up to the maximum account.

“They don’t have to worry about overpaying for it or losing it if they weren’t able to be in front of their computers when it was sold,” Kobus said.

Videos have become more important in the machine inspection process, and Ritchie is exploring a “concierge-type” service where prospective buyers will ask questions virtually while an inspection is occurring.

Another option, one the company is looking to expand, is what Ritchie terms a “virtual sale,” where an inspected machine is sold where its located instead of being transported to a Ritchie sales facility. One of the top sellers in the company’s recent Orlando event — a $460,000 2015 Cat 374F L excavator with 2,698 hours — was a virtual sale.

Which raises the question, are live auctions a thing of the past?

Kobus left the answer open. “That’s under evaluation,” he said. “Certainly, there’s a social aspect to a sale, but it’s all about choice. As we collect this data, we’re going to evaluate what the auctions of the future look like.”

Compact Utility Loaders Storm the Market, More Versatile Than Ever Before

Construction Starts: When Will the Post-Pandemic Road to Recovery Be Complete? 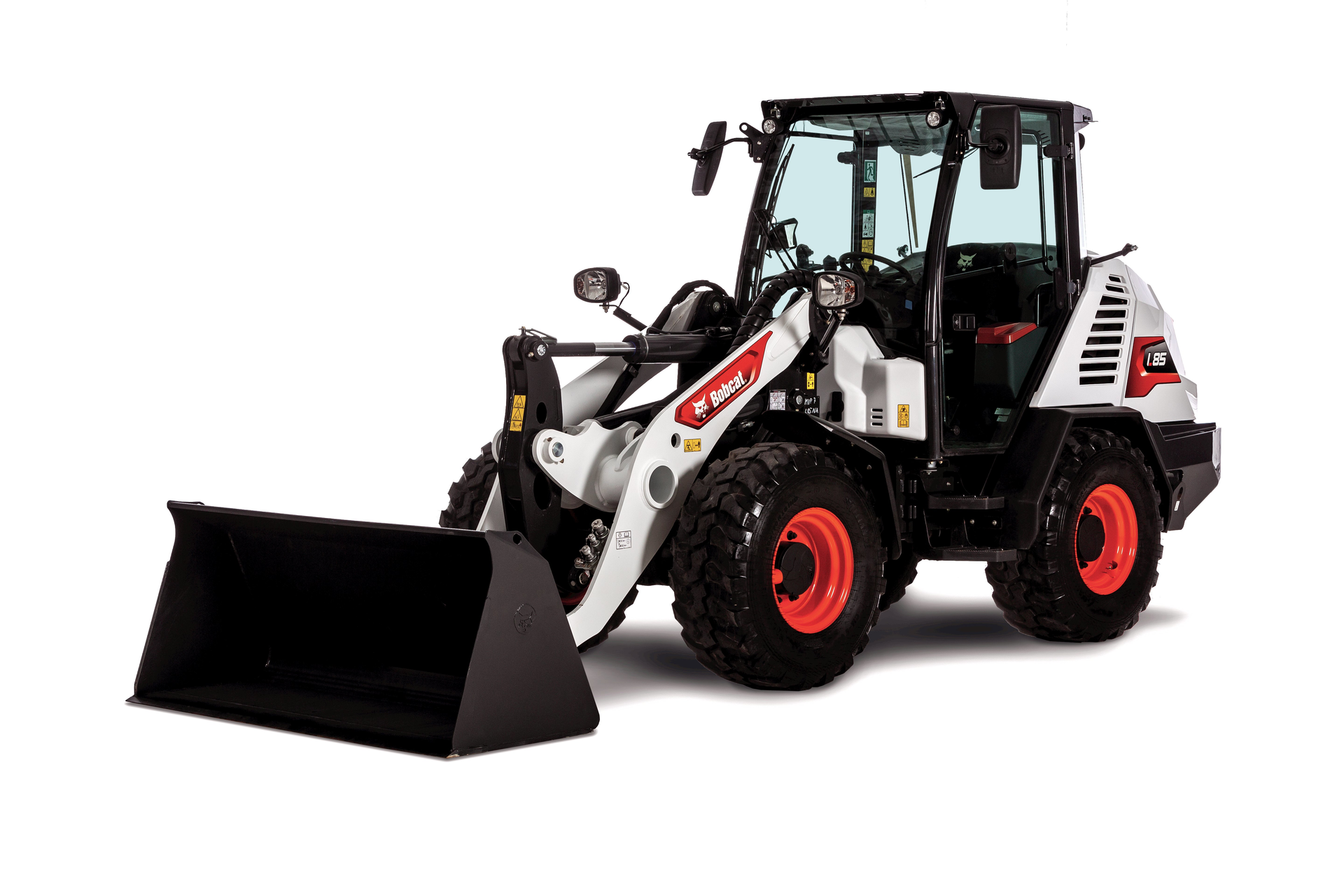 Compact wheel loaders continue to grow in popularity as contractors discover their many attributes: how they can dump higher, travel faster and turn tighter than skid steers and compact track loaders. And did we mention they do all this with a smaller engine and great fuel economy?

Bobcat’s latest entries into the compact wheel loader field include the L65 and L85 with standard bucket capacities of up to 1 cubic yard and a Z-bar front linkage. In addition to buckets and pallet forks, the new loaders hook up to a wide range of Bobcat tools and attachments using the powered Bob-Tach system.

The new loaders run on a redesigned Tier 4 Final Bobcat engine with improved cold-weather starting capability and components simplified for routine maintenance. The 2.4-liter turbocharged diesel engines put out 55 and 68 horsepower on the L65 and L85, respectively. The attachment control mode enables you to vary the engine and travel speeds separately to optimize auxiliary hydraulic performance.

Bobcat L85 compact wheel loaderDoosan BobcatA large fuel filter protects the engine from contamination and results in a longer filter life and increased holding capacity. The lift pump and self-priming fuel system offers continuous forced air outflow and eliminates the need for a primer bulb. And a pre-filter protects the lift pump from debris and particles that increase wear and degrade performance.

Articulated steering on the new L65 and L85 loaders delivers high maneuverability and a tight turning radius. The electronic hydrostatic transmission (E-HST) makes quick forward-reverse direction changes efficiently, increasing acceleration and delivering seamless speed control. The combination of the E-HST transmission and horsepower management automatically adjusts the loaders’ drive system to maximize pushing and loading power while minimizing the chance of stalling. Unlike other anti-stall systems, operators can maximize engine and drive torque on the L65 and L85 to match the demands of heavy lifting and digging.

The Future of Paving? Volvo Unveils Its CX01 Concept Compactor 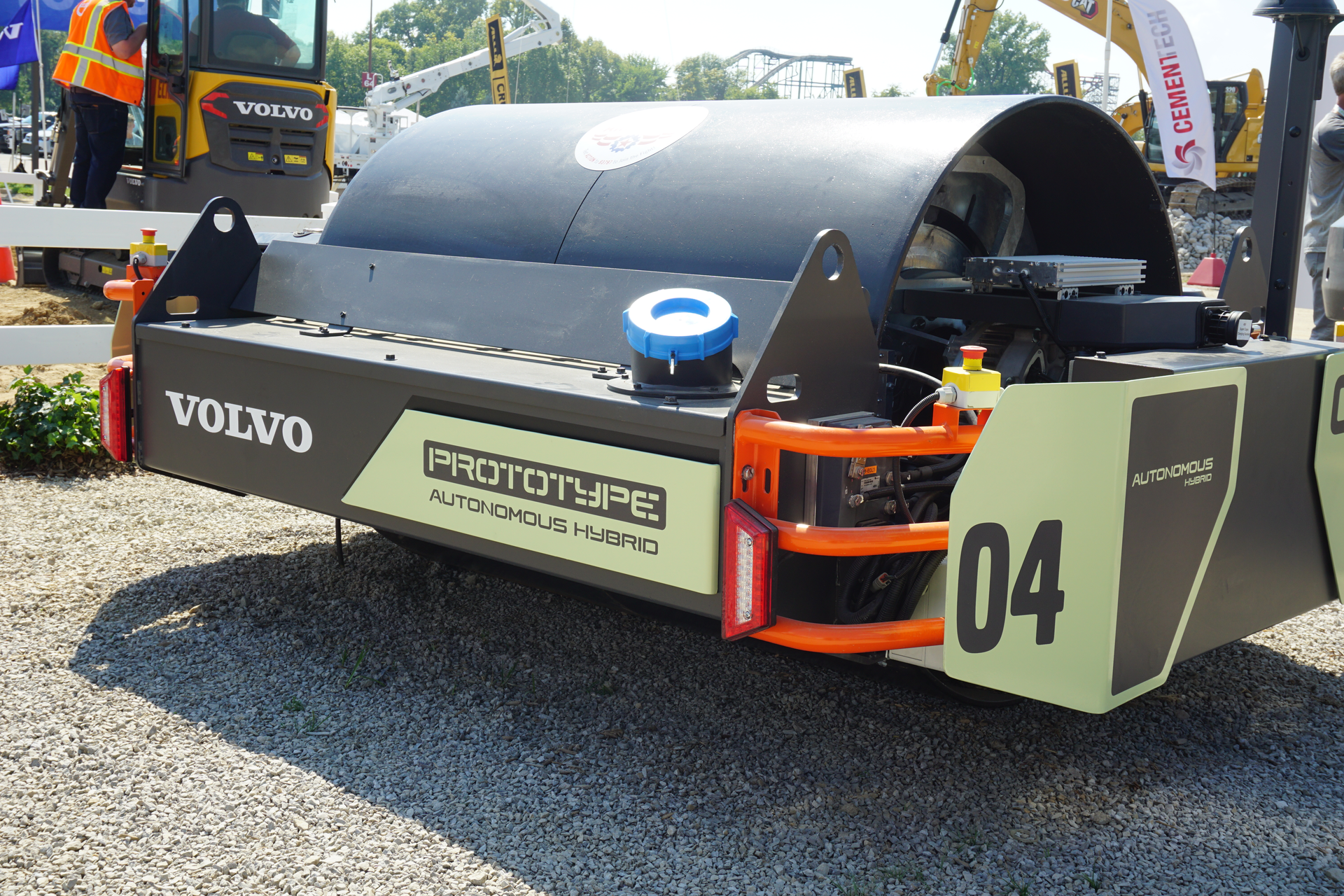 Asphalt compactors aren’t known as the most difficult machine to operate on the job. Although compactors perform a critical function especially when smoothness specs are at stake, many contractors put their less-seasoned operators on them.

But what if these machines didn’t even require an on-board operator?

Enter Volvo Construction Equipment’s CX01 asphalt compaction concept, a planned ConExpo reveal that had to wait until the recent Utility Expo to get in front of contractors.

“We just wanted to examine what the future of compaction would look like,” Justin Zupanc, head of Volvo CE’s asphalt compaction development team, told Equipment World at the show. “We wanted to create a better operator’s environment, reduce fuel consumption and exhaust emissions and boost productivity.”

“Better operator environment” translates to no cab. Instead, a connected fleet of CX01 single-drum units directed by a downloaded compaction plan would be either be remotely controlled by an operator or controlled autonomously.

Volvo already has an autonomous system on its TA15 haulers, now in customer testing, and the plan is to test a similar system on the CX01, Zupanc says.

The CX01 does not have an articulation joint “so there’s no balance point, there’s nothing that we can steer away from,” Zupanc says. Volvo solved this by using a split-drum — which has two halves that can be operated independently —  kept upright by using a self-balancing control system. (The split drum comes off of its current 9-ton class machine sold in Europe.) To turn, operators can vary the rate of speed of each half of the drum. “You can make a fairly tight turn,” he says.

And while it wouldn’t be used while the unit is on asphalt, users also would have the ability to pivot steer the machine.

Volvo says the CX01 — which stands for compaction experimental unit No. 1 — provides the means to “fundamentally rethink the paving process.” By removing the operator, you’re also removing their exposure to vibration, noise and dust.

As envisioned, a fleet of CX01s could be deployed on larger jobs and communicate not only with each other but with other machines on site. The machines could survey the job, report on mat conditions such as density, temperature and passes (which intelligent compactors are already doing) and determine when and where to compact. “They can shift over if an area is already compacted,” Zupanc says. “All information is available to the crew and to other machines. You could even send it to the asphalt plant.”

The machine’s compact design and maneuverability could also lead to streamlined compaction cycles, reduced costs and more agile work patterns, Volvo says. The rolling pattern, weight and number of rollers could be adjusted to match the width, thickness and speed of the paving operation. Using Volvo’s existing Co-Pilot system, operators can use a touchscreen to remotely control the compactors.

The CX01 has a flexible power system. It has both a 1.7-liter diesel engine and an energy storage system that can be operated indiesel-only, hybrid or fully electric modes. “The diesel is only there to spin the 20-kilowatt generator,” Zupanc says. The generator in turn powers two 48-volt ultracapacitors placed on each side of the drum, which in turn are powering three 14-kilowatt electric motors, one for each side of the drum, and another to power the vibration system eccentrics.

“We had never used them before, and we wanted to see how they worked,” Zupanc says, explaining why Volvo was using ultracapacitors on the CX01. “While they don’t have the capacity of lithium-ion batteries, they are good for vibration and they have a long lifecycle. They may not be the right solution because they don’t have that longevity, and who knows, we may couple them with a lithium-ion battery pack down the road.”

Because the ultracapacitors need a constant charge, it’s unlikely that the diesel engine will go away as long as they are used.

Volvo is also exploring using a low-friction water-reduction polymer-based coating on the drum surface — now theoretical — which could also be used on its other compactors. This would combat the common problem of asphalt sticking to the drum, now solved by using water. The CX01, however, has limited water storage.

Volvo produced =the following explainer video of how it envisions the CX01 being used:

Video: Do Big Profits Have You Overlooking Your Biggest Threat? | The Dirt #41 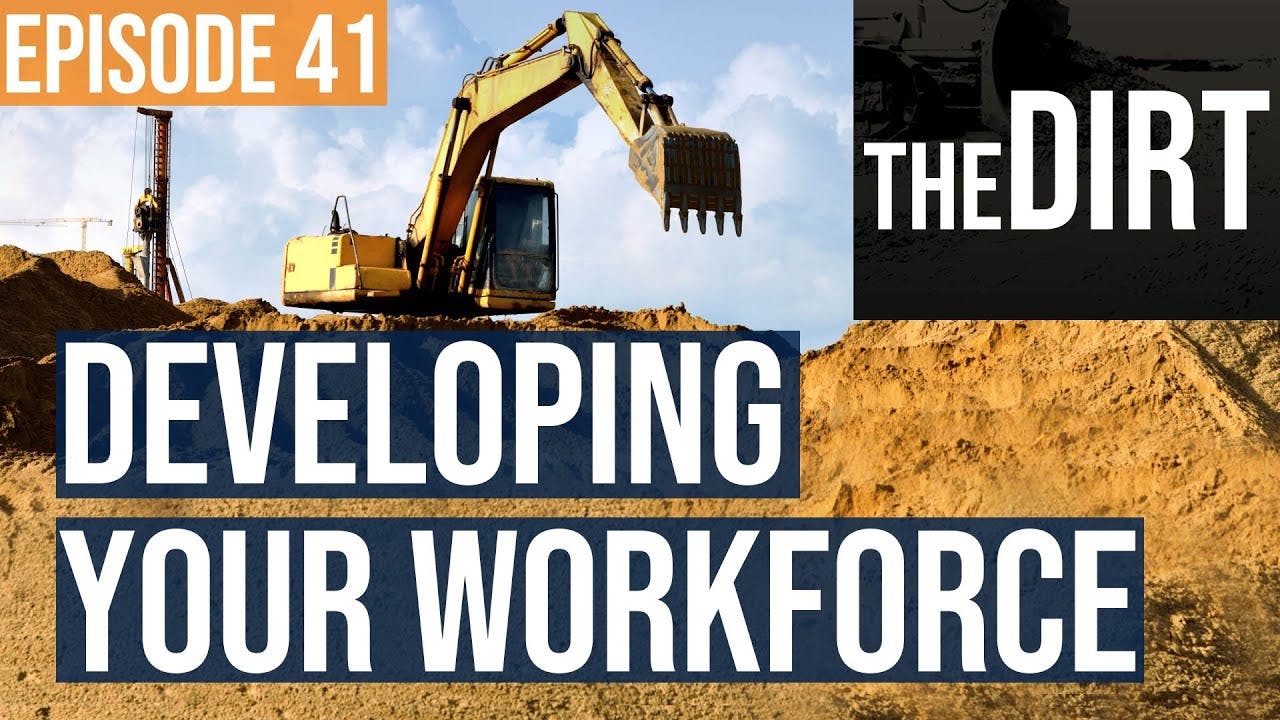 Missing deadlines because you can’t staff projects adequately? Stopped bidding because you’re backlogged? The story is all too familiar.

In this episode of The Dirt, Aaron Witt, chief dirt nerd at Buildwitt, joins host Bryan Furnace to discuss a paradigm shift in the construction industry. The most urgent threat is not going out of business because of a recession or lost bids, but rather, a lack of employees.

So, what’s the solution? Aaron may only be 26, but he has a few ideas. Find out where he’s hedging his bets to solve the dirt world’s people problem.